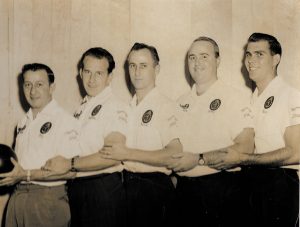 The upside of rifling through my memory challenged mom’s papers as I try to stay ahead of whatever bill paying disaster looms large, is that I find a treasure like this photo. For those of you who are around my age, I bet this has a ring of familiarity to it. My dad is second from the left and he bowled twice a week, every week of my childhood. Because he died before I could formulate any meaningful questions about this activity, I can only guess what was behind his commitment here.

Most of you have heard of Maslow’s hierarchy of needs. If not, this image does a great job of illustrating various needs that must be addressed in order to hang out in the Self Actualization space. 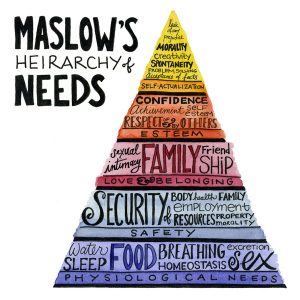 As I imagine what need bowling with his buddies filled for my dad (other than an excuse to drink and smoke), I am sure it fits into the Love and Belonging space. According to the experts who study this, the bonds of community are a very particular thing. We have ‘the family’, but we evolved to desire a tribe a bit large than that – specifically between 20 and 30 people. Interestingly, this is the size of most military platoons, which is why so many soldiers who come back from deployment talk about how much they miss the brothers and sisters with whom they served.

The desire for inclusion is powerful and hard wired in our brain. Our longing for connection explains so much about the lengths we will go to be a part of a group. My dad was the epitome of ‘a man’s man‘ and yet he took great pleasure in his active engagement with his crew and the ‘wearing of the uniform’ that told the world they were a team. (If you look closely at the shirt insignia, you will see that this team was sponsored by Stroh’s, the beverage more abundant than milk at my house growing up) As I look back on my early years, it is clear that I had the good fortune of having a couple of different tribes gifted to me. My neighborhood was brimming with kids and I had a massively large extended family with a full platoon of cousins that I saw regularly. But I think what ultimately formed me into the gatherer of people I believe I have come to be, is the role model my dad was with this. His delight spurred me to want to experience that too, and his apparent lack of fear to actively reach out and create new clans, allowed me to let go of the natural fear of rejection that will arise when we make ourselves vulnerable like that.

It would be wonderful to be able to show my dad the ripple effect he has had on his grandchildren in this way. I am going with the belief that somehow he knows.

2 thoughts on “Love and Belonging”