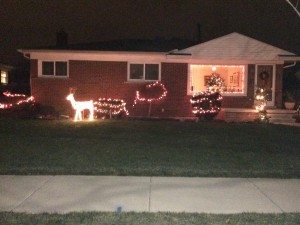 how might I be kind? Before I headed to my 82 year old mom’s house in Michigan on January 1st, I had committed to making that my mantra for 2016. In this particular instance, how might I be kind and generous?” I didn’t really anticipate being provided with so many opportunities to practice it in the two days I was there.

This is a picture of the house I grew up in, just south of Detroit. I was moved to snap it because it made me happy that the house was decorated for the holidays, and I am acutely aware that this may not be the case next year. My mom and her long time companion still live there. They each have their own challenges – he can’t hear anything, in spite of his hearing aides, his issues with his GI tract are monumental (just ask him) and he still smokes two packs of cigarettes a day, even though he is minus two lobes of his lungs from a prior cancer surgery. My mom’s memory is in such decline that she cannot recall events that happened more than five minutes ago. Together, their capabilities allow them to live relatively independently in their home, albeit with great fragility. Most often, I can find some humor in the way they interact with the world. This time was harder.

The life they lead is relatively contained. Other than regular visits to some local diners and a weekly excursion to the casino in downtown Detroit, they are mostly homebound. One source of enjoyment is playing online games on their computer. Unfortunately, they cannot seem to resist clicking on any pop up that jumps onto the screen, resulting in a whole slew of problems. They asked me to take a look at what was causing their trouble, and while I am by no means expert at diagnosing computer issues, I figured I was probably just a little better than they were. As I scrolled around, it became evident that not only did my mom click on things, she provided her credit card number as well. This is not the first time this has happened. As she sat next to me, showing me which card she used, I knew I was being presented with an opportunity to put my mantra in to practice. Internally, there was a storm a-brewing, but I gave being kind my best shot. I could feel her shame for having done this. I did not wish to make that any worse.

I had the benefit of a 6 hour drive back to Wisconsin in which to observe the swirl of emotions I was feeling as a result of my time back home. In the face of some really heart wrenching encounters (I am also the guardian of a brother who lives in a nursing home there, but we’ll save that for another time…), I believe I was present with a generous spirit. It wasn’t easy and many of the emotions that I kept at bay when I was there, showed up on steroids on my way back. I cried, a lot. And I just let it come. One of my very best friends in the world called me during the drive, only to be met with a barrage of sobs. (Bless her, bless her).

I have noticed a greater willingness to let my tears come lately. Apparently I have finally learned that holding them in wasn’t a good long term strategy. And while I will strive to not embarrass myself by letting them loose around strangers or casual acquaintances, I am committed to being kind to myself by crying tears of joy, sorrow, fear and anguish with those I love and who love me.

PS: This ‘being kind’ thing probably will fall flat on its face when I get in touch with the online company who is taking advantage of people like my mom on the phone. There are limits…

2 thoughts on “In this moment…”