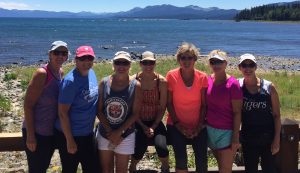 For those of you who follow my blog, you may have noticed a bit of inconsistency in terms of when I post. While it is on my To Do list weekly, I am not always moved to write about something that I feel others might want to hear. While riding my bike this morning, I was struck with an idea that I wanted to share with you, and I would love to hear your stories around this theme.

Last week, I got together with several long time girlfriends from my hometown. Many of us have known one another since grade school and all grew up in the same blue collar, middle class community outside of Detroit. What was so present and remarkable to us as we shared lodging, meals and conversation, was how at ease we felt with one another, even though we get together typically only once a year. A fly on the wall watching would see that great diversity of opinion exists among us about big things – religion and politics to name a few. And yet, when we shared our varied views, there was this felt sense that whatever was said came from a place of deep care and limited judgment. I got really curious about why this was and settled on the fact that our ‘formative years’ were spent in the same environmental goo. Yes, we each had unique family experiences but the substrate in which we developed was still present all these years later.

Not surprisingly, we spent quite a bit of time reminiscing too. One topic that came up was about bullying during our school years. This is probably a function of my diminishing memory, but I have zero recollection of being bullied. I do, however, have a vivid memory of being the bully once. (I am sure I did this more often but you’ll have to ask my siblings about that). There was a girl in our 7th grade class who had a mouth full of braces. It was apparent to a few of us that it had a negative impact on her breath. So, we decided it would be funny to put a bottle of Scope in her desk. (Is your heart sinking now? Mine is.) When I saw the look on her face when she pulled it out, I felt such shame in having caused her pain, that I vowed to try to never hurt anyone like that again. I can remember this like it was yesterday and know that it shaped me in an important way.

Everyone had some story about bullying but one in particular really got me on to this topic of what forms us. I won’t go into the details of this particular incident but apparently I took a stand against participating in some group bullying targeted at my girlfriend. I have only a vague shadow recollection of this but have been thinking ever since – “How was I able to be bold like that in fifth grade? Was I born with that gene? Were my parents role models for this? How are these characteristics playing out in my life today? What have I passed on to my kids?”

Not surprisingly, the Universe seems to be lining up to help me see examples of how the experiences of the past may be influencing the present. I can begin to draw a line between my fifth grade self and my inclination toward issues of social justice. I am humbly taking a little credit for passing along the ability of my children to take a stand too. I have a heart brimming over with gratitude as I watch one of my kids struggle with a situation that will impact him professionally, use integrity, honesty and fairness as the metrics around which he will make his decision.

Environment, experiences and the genetic lottery clearly are at play when we look at how we came to be who we are right now. A rearview mirror can be handy here, but I am trying harder to be more consciously aware ‘in the moment’ when something is or can, if I seize the opportunity, shape me into a better version of myself.