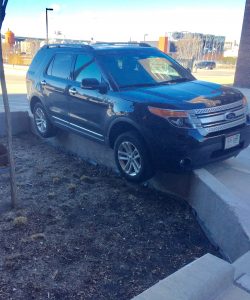 Yes, I did this. I am solely responsible for this embarrassing incident.

A week ago, my daughter and husband and I headed downtown for a pre-birthday brunch. It was warm but the wind was wicked that day so I dropped them off at the restaurant then began the search for a parking spot. I circled several blocks before finding one that seemed a bit tight for my vehicle but thought I could fit. My initial attempt was pretty unsatisfactory so I decided to back up and try again. This was followed by a surprising jolt and anxiety provoking tilt toward the passenger side of my car. What the heck! This happened in spite of all of my car’s bells and whistles that I have come to rely on to keep me from backing into things. There was no beep and the camera didn’t convey any concern.

I made a commitment not to cry and then called trusty AAA. It was going to be an hour before they showed up so I sheepishly headed to the restaurant to relay the story to my family. They kindly tried not to laugh out loud and smartly ordered me a large, emergency mimosa. Not surprisingly, I lost my appetite as I chewed on what caused this humiliating situation (although that might have actually been because of the big muffin I ate before I left the house, rationalizing that this indulgence was a justified part of my birthday celebration).

True to their word, the jovial tow truck driver arrived as scheduled and didn’t make fun of me at all. (Although my daughter and husband couldn’t get their phones out fast enough to take a picture) He instructed us to go have another beverage as it was “going to take a while to figure this out” and promised to call us when he was done. Twenty minutes later he drove my upright  SUV to the bar where we were stationed and happily announced there was no apparent damage to be concerned about.

It took several hours before my brain settled enough for me to get back to the question, “How did this happen?”. I knew this was all on me and was probably the result of impatience and inattention. I was a bit too focused on ‘where I wanted to be’ and not present enough with the ‘here and now’. Slowing down and attending to subtle details is probably never going to be something I fully master but boy would I like to get better at it. Honestly, I would be the worst witness to a crime. I can’t tell you my best friend’s eye color, or if you wear braces on your teeth.

I know that my lens isn’t sharp but I think it is wide. When I meet someone for the first time, there is a 95% chance I will forget their name in five minutes. I believe (and hope) this is due in part to my desire to move on to more interesting things – like learning about who they are and what they do in the world. I like that I don’t pay attention to the jewelry someone has on or if they are wearing a certain kind of designer clothes. (One time someone asked me about the clothing labels I prefer and I said none, I cut them all out because they irritate my neck. That was the wrong answer I think)

But there are clearly times when having such an inattention to detail causes me anxiety and trouble. (See above) I know I am missing things that would be useful for me to know. One of my goals is to be more discerning about when to be near-sighted or far-sighted, but what I really want is to cultivate a lens that allows me to do both at the same time. I also seek to recognize what’s most important in any moment. I know I am better at that when I slow down, but I’ve been a swift mover in the world most of my life. So if you see me hurtling forward at warp speed, hand me your glasses. I want to see what you see.