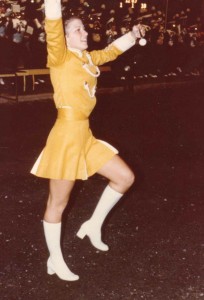 I was back in my hometown of Trenton, Michigan again a few days ago and succumbed to some significant reminiscing. The house I grew up in, and where my 82 year old mom still resides, is just a few blocks from my high school. As I drove past the THS football field, I was struck for some odd reason with memories of my baton twirling days. Yes, I was a majorette with the marching band! I took lessons, starting around age seven, from a much idolized neighbor across the street. Clearly I learned some tricks of the baton twirling trade from her but my most vivid recollection was that she agreed after each lesson to play my favorite pop song of the day, “Last Kiss” by J. Frank Wilson and the Cavaliers. https://www.youtube.com/watch?v=bh4se9YMV3A

I felt so fortunate to have been a part of the marching band, even though I had no ability to actually play an instrument. (The grade school I went to offered violin or accordion lessons, so enough said about that). I enjoyed everything about performing with my school mates. I loved marching to the drum beat, spinning and swirling to the rhythm of each song and putting on what I thought was a mighty fine show. Fear of making a mistake or dropping my baton never even crossed my mind.

These recent musings transported me back to a very specific half time show. I was a senior then and the dad of one of my best girlfriends growing up was kind of front and center in the stands. I recall focusing on him a bit while I was strutting my stuff with my fellow majorette buddies and just experiencing the delight of being out there. Afterward, he made a point of coming up to me and saying, “You looked as if you were having the time of your life! What a presence you were.” And as I look at this picture from 1974, I think his description kind of captures it. But I surely didn’t have an awareness of showing up like that at the time. I knew I was having fun, being myself, but sort of thought everyone else I was surrounded by was doing the same. (What I wouldn’t give to be able to fit in that uniform and wear those awesome boots again! Although I can still very much rock high heels – just ask my sister-in-laws)

When did I move from this carefree space to being concerned about making a fool of myself, worrying about what people thought of me, or being convinced that others knew things that I didn’t? I believe I probably spent more than two decades inhabiting that place of self doubt and limiting thoughts before I came out of that trance and remembered who I was – that girl with the baton. Over the past decade I have become increasingly aware of my desire to inhabit her more fully, so that I might again experience the euphoria of living thoroughly in the moment, albeit in a different outfit:-)