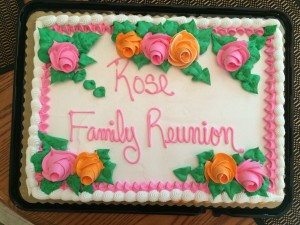 I returned to my roots this weekend. The Rose Family reunion extravaganza was held near my home town, just south of Detroit. One of my cousins (Eugene) graciously opened up his house to all of us and when we drove into his driveway on Saturday and I saw all these cars parked there, I immediately got a bit weepy.

This was my dad’s side of the family and of the nine children born to my Grandma and Grandpa Rose, only two are still living. As was typical for Catholic families in the fifties and sixties, my aunts and uncles had tons of kids, making for great fun and total chaos on Sundays when we would gather together. My mom was able to join in, as well as my sister and brother and his wife, who came from the west and east coasts to be a part of this. Many cousins and their families were in attendance at this shindig, most of whom I haven’t seen in decades. The time fell away quickly though, as we eased in to ‘catch up’ conversations, genuinely enjoying being together again. Stories were shared, laughter was abundant and a true sense of revelry was present. Gratitude was the palpable sentiment, as we acknowledged publicly and privately how awesome it was to be in each other’s presence again.

As we were leaving, my husband made a remark that stopped me in my tracks. “What an amazing group of kind, gentle and humble people.” This struck me with an intensity that surprised me. Not because I didn’t already know it – this has been a subconscious belief that I have held about my family my whole life. But I don’t think I have ever actually attached words to it. Giving voice to this somehow supercharged my appreciation for it.

I get my work ethic from my ancestors for sure. Most of my family were tradespeople. A large contingent were boilermakers (in case you don’t know what that is, it is a trained craftsman who works with steel in a variety of ways). There were/are plumbers, electricians, landscapers, painters, beer truck drivers… you name it. And if something went wrong at our house when we were growing up, one of my uncles showed up to fix it. (My dad was the beer truck driver and the genes for fixing things seemed to have skipped him. This was evidenced by the time he decided to replace the brakes on the car by himself and after grinding away at it for an entire day, realized that he put them all on backwards. He was a huge fan of duct tape though and could definitely provide you with beer if you needed it). And while many of my cousins are now ‘retired’, it seems they have just shifted what they are ‘working on’ to something else. I listened to my one cousin who is still working as he described how awesome it was that overtime had been so abundant lately, allowing him to be able to afford to remodel his house. No slackers here…

Throughout the evening I heard stories of the work my family members did and was reminded of the physically challenging nature of their jobs, as well as how skilled they were at problem solving. Interestingly, this week on my favorite radio show – Onbeing – Krista Tippett interviewed Mike Rose (no relation to us but how about that coincidence of him having the same last name!). He is a research professor in the UCLA Graduate School of Education and Information Studies and studies the often-ignored intelligence required by service professional and physical laborers. The focus of the interview was primarily on “meaningfulness of work”, which he describes as “a more fluid, rich and variable concept than we tend to imagine”. In this interview he shares,

You will hear people talk about the importance for human beings to feel that we’re doing something meaningful and purposeful with our lives. But I feel like we lose sense of all the different ways in which work is meaningful. And to me, you know, working to put food on the table for your family to eat also makes that work meaningful in some sense. I don’t know. I’m kind of throwing that out because this is something that concerns me, that this is another way we might have of making people either feel good or bad about the work they do and their identity.

He goes on to talk about the combination of physical and mental work required by tradespeople, service workers and manual laborers

So the plumber who reaches up inside of the wall of an old building where he cannot see and he can only feel, and through feeling around the structures in there, feeling the rust, feeling moisture if there’s any, feeling the way the thing is structured, he’s visualizing what’s back there that he can’t see and then bringing a knowledge base to bear on trying to figure out what the problem may be. Think of what a complex set of mental operations are involved in that.

I knew I would have fun seeing everyone and connecting again at this reunion. I am grateful, too, for the reminder of how decent and hardworking my relatives are. I am lucky to come from this stock and hope to be able to honor this gift by moving about in the world with the same degree of kindness, gentleness and humility that these folks do. 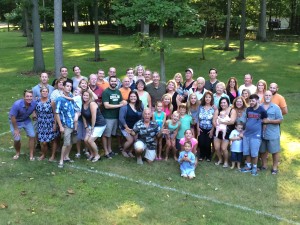